Acupuncture is part of a system of oriental healthcare that uses the concepts of yin & yang in diagnosis & treatment.

It has documentary evidence going back over 2000 years and further evidence for centuries before that, yet it is also able to deal with very modern complaints( e.g. Stress related conditions). It sees ill health as arising from irregularities in the way energy known as Qi (pronounced chi) moves around and within the body. Qi circulation can be affected by both internal and external factors. “Where there is pain, there is no free flow; where there is free flow, there is no pain” is one of the key sayings in Chinese medicine. Pain can manifest in many different ways. 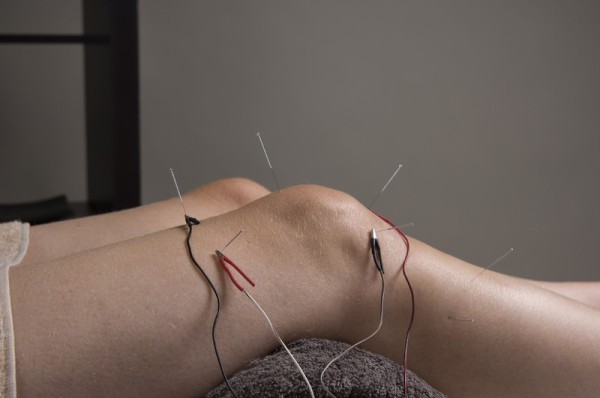 Electroacupuncture being used on the knee

Qi flow can be adjusted with the assistance of your acupuncturist to help you be in the best health possible, aiming to free up energy & unblock restriction, so leading to better health and vitality.

How does acupuncture work? Modern research suggests that puncturing the skin causes endorphins to be released, these are chemicals known to be involved in pain relief. There is also the ‘gate theory of pain’ with needle insertion interrupting the way nerve impulses are transmitted. There remains much more research to be done from a Western scientific perspective.

The British Acupuncture Council (BAcC) funds the Acupuncture Research Resource Centre which aims to provide a focal point for acupuncture research information for its members, as well as the public. Some of the papers are quite old but still relevant.

Acupuncture employs a number of different techniques but most commonly, very fine needles are inserted into carefully selected points along Qi pathways or channels (meridians) in the body, known by clinical experience to be effective in helping the body to heal itself. Meridians extend over much of the body’s surface both front & back, so points selected are often a long way from the site of any problem. Don’t be surprised to find a needle in your foot for treatment of a headache or sinus pain.

The style in which I practice identifies which pathways are affected by whatever condition you arrive with, needles are used in areas distant from the troubled area to affect the target area. This is known as the Balance Method.

The effect these needles have can be altered where necessary with supplementary treatment.